My parents were once hawkers who sold prawn noodles in Eunos Crescent. When I was younger, I would beg my guardian to let me visit them and when I did, I would sit from afar and observe my parents at work. I remember how Ma would man the storefront, fearlessly handling the forthcoming slew of orders and managing the cash register, while Pa would hold the fort in the kitchen, singlehandedly ladling scoop after scoop of prawn broth into the customers’ bowls. It was a beautiful thing to watch and it is something I cannot forget.

I knew nothing about food then. But from the never-ending throng of customers that patronised the store, I guess we were managing fine. It wasn’t until later that I learnt of the predicament that was to come. Exorbitant rental eventually took us out and the family business ceased to exist.

As I continue to grow older, my parents’ prawn noodle narrative hasn’t really ended. From time to time, I would come to hear Pa’s kitchen stories and Ma would eventually divulge how the entire business started. Along the way, I learnt that, even while I was still in Ma’s womb, Ma continued her part of their daily hustle. I also eventually came to know that it was only until when Pa realised that Ma’s huge tummy proved how dangerous it was for her to be travelling to work on a motorcycle that he decided to get a car instead. I guess, looking back, I was already part of their narrative.

In many ways, I am appreciative of what Ma and Pa told me. In many ways, I am grateful for being involved in their legacy. I guess somewhere in between, Ma and Pa would have thought of passing down their skills to me. Yet, sadly, it was not meant to be. The inherent skills of cooking up a bowl of delicious prawn noodle were something that belonged only to them, and they are something I don’t possess. Even if I tried to learn (which I never really did), my lack of culinary dexterity (proven from the countless times I cut myself) largely determined my ultimate failure and incompatibility with Pa’s golden ladle.

And so, I decided to focus my attention elsewhere – hosting and writing.

I picked up hosting during the later tenure of my Junior College years. I wasn’t motivated to study and wasn’t doing exactly well academically. Yet as much as I disliked studying for the sake of studying, I enjoyed serving the school. I joined the Debates Society and volunteered to host for the bulk of my alma mater’s concerts and events. Like every son of the nation, conscription happened and I stopped hosting altogether.

Fast forward two years later, with my A-level results being substandard and nothing exactly available on the plate, I decided to take a gap year. It was 2017 and I was 21. I took my first writing photojournalist internship and learnt the nuts and bolts of the media industry. I picked up new skills, such as copywriting, copyediting, photography, Lightroom editing, and some iota of videography skills, along the way. Most importantly, I met my writing mentor, Clara Lock, who has been most generous with her feedback and criticism. I will have to be honest here, from the kind of articles I have been writing about, I am not a writer-writer but more of a journalist. Even so, I dare not proclaim that I am good at what I am doing. There is so much to go, and I am barely scratching the surface. Beyond that, I have also managed to travel quite a fair bit. Most of these travels were part of media trips that I was fortunate enough to get. I never really had the chance to travel when Pa and Ma were working and so these new experiences really shaped my perspective of the world. 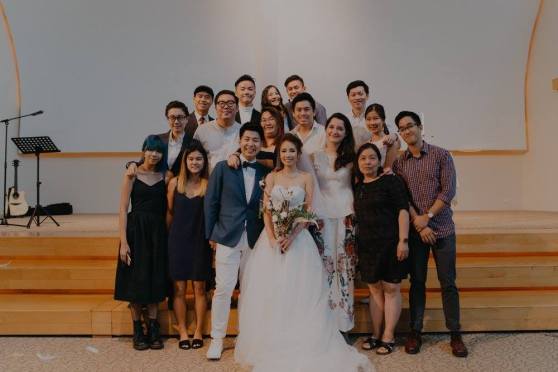 With my Editor Marissa Mir

With my mentor, Clara Lock, at her book launch!

Somehow in 2017, I decided to give hosting a shot again. Worried that I am unable to cope with the stage fright and present messages eloquently, I decided to give myself training — a part-time server job at a local restaurant. Deliberately putting myself back into the front lines where I get to relive some part of Ma’s hustling days and be forced to speak to customers, I gradually rebuilt the confidence I once had.

Today, in 2018, aside from the three job titles — writer, emcee, and part-time server — I am holding on to, I am also an undergraduate student in a private university. I know life is going to be even more hectic from now onwards. But I guess, I am someone who thrives on being busy.

After all, if I don’t hustle, I won’t improve.