This article was first published in Sethlui.com on 11 June 2018.

In the spectrum of Japan’s cities, Kyoto is known for her well-preserved traditions and culture. While the traditional architecture, ever-evolving street fashion, and historical temples are areas where culture and heritage swell, much can be identified from the iconic food too.

Beyond the eclectic arsenal of seasonal ingredients and eccentric dishes, the showmanship of Japanese chefs is another alluring facet of Japan’s personality. 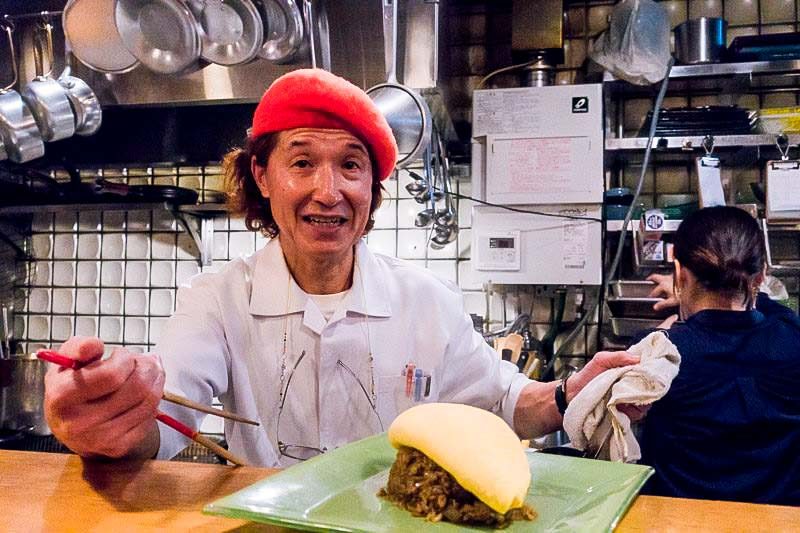 Omurice is a form of Western-style Japanese delicacy (yōshoku), with origins from the turn of the 20th century, comprising flavoured rice wrapped within a fluffy omelette.

A go-to choice amongst diners in some family Japanese restaurants, much of the dish’s popularity today is credited to the viral video of Japanese chef, Yukimura Motokichi, who wows customers with his theatrics whenever he prepares the omelette dish in his restaurant, Kichi Kichi. Situated in Kyoto, admission to Kichi Kichi is strictly made through online reservations, which may take weeks or even months for a single lunch or dinner slot.

You are advised to adhere to the timing allocated and arrive just on time; entry is denied if you arrive too early or too late. Chef Motokichi, in his signature red beret, can often be seen ushering contented guests out of his restaurant before cheerfully greeting new (and often, hungry) ones at the entrance.

It is almost impossible to miss the distinctive mixture of aromas — wok hei from the fried rice and sweetness of the demi-glace sauce — upon entry. With warm fluorescent overhead lamps and abundant wooden furnishing, the restaurant exudes a homely and cosy vibe. Featuring only an eight-seater bar counter, a six-seater table, and an open kitchen, guests should brace themselves for an intimate dining experience. Having heard rave reviews of his theatrics and dishes, I was undoubtedly excited.

With over forty years of experience under his belt, Chef Motokichi commands a distinctive presence behind the bar counter, enthralling guests with his showmanship and comic relief — think fire show, egg toss, some incomprehensible Japanese phrases, and how Salt Bae would garnish a dish with chopped parsley. First up, I tried Kichi Kichi’s signature, the Fluffy Open Omelette Over the Fried Rice (¥2,700, approx. S$33.10). With a fluid stroke of his knife, Chef Motokichi split the egg into two, allowing its runny insides to coat the fried rice, before dousing it with a demi-glace sauce.

Having ridden the hype train of this dish, watching the numerous Instagram videos and witnessing Chef Motokichi’s live performance, this omurice, to my disappointment, was underwhelming. The egg was lightly seasoned and came creamy, runny, and fluffy. While there was some wok hei in the fried rice, it was slightly bland and did not leave me yearning for a second bite.

Honestly, I would have prefered the tangy tomato fried rice (which is not on the menu) and perhaps more flavours to let the dish stand out.

It was also quite pricey, so I recommend getting the cheaper but smaller alternative instead, the Fluffy Open Omelette Over the Fried Rice Half Size ( ¥1,450, approx. S$17.80), just to taste what all the hype is about. Next up, I tried the Beef Stew (¥3,100, approx. S$38), which was hands-down my favourite. The beef came in hearty chunks and while it was slightly gamey, the meat was downright tender and extremely juicy. I thought the sauce, which contained alcohol, would have been nicer if stewed a little longer as there was a mildly bitter (but tolerable) aftertaste. The various garnishes, such as the enoki mushrooms and capsicums, added a refreshing crunch to the overall dish. Fried till crisp and golden brown, these chicken cutlets were tender and succulent, definitely a match made in heaven with the saltiness of the melted mozzarella cheese. The spicy kick from the mustard also provided a nice contrasting flavour profile to the dish as well.

Anyone who has visited Kichi Kichi can tell that Chef Yukimura Motokichi reveres his craft. In a way, he makes it his mission to bestow guests with a memorable, hearty dining experience.

While the omurice was personally a bit of a letdown, I’d still recommend visiting for the overall experience and to try some of the other delicious (and less hyped) dishes. The catch is that you need to make a reservation as early as six weeks in advance, so get planning!